What is Robot Tax?

Companies are starting to replace people with machines. Governments are losing their ability to tax workers resulting in lost revenue and increase in unemployment. Can taxing robots solve that problem? Is it that simple?

What is robot tax? It is the concept that companies replacing workers with automated machines requiring to pay tax. This money in form of robot tax can then be diverted for other programs such as reskilling/retraining programmes.

Bill Gates on Why Robots should be Taxed:

Bill Gates argued that the best way to slow down automation so that the society has enough time to adapt to the changes that automation bring is by taxing the companies for every worker they replace with a robot. For example, if they pay a human worker $50000 every year, for whom they replace robots, then the company would need to pay $50000 every year to the government in form of tax.

Then it takes the cost out of the factor as a reason for automation, which in turn would cause companies to slow their transition to more automated robots.

In 2017, the European Parliament called for EU-wide legislation to regulate automation, which would include a framework for their development and deployment, and the establishment of liability for their actions. The majority of European leaders agreed that the rise of automation should be controlled.  However it is important to note that none of these reforms included a tax. The EU was concerned about a robot tax that may stunt innovation and competition. 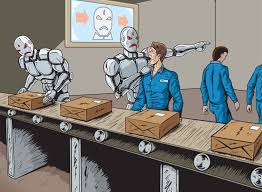 Automation threatens that generate more than 250 billion pounds in wages. Robots increase productivity and therefore profits. Big corporations are more likely to move towards automation threatening jobs of millions. Robot tax could reduce the rate at which jobs are lost to automation – keeping more people in employment for longer. The skills that people will need to transfer from one industry or type of work to another take time to acquire, as do the government schemes needed to provide adequate training. Slowing the implementation of robots gives those workers the time to train up elsewhere.

ROBOT TAX COULD LEAD TO A UNIVERSAL BASIC INCOME *UBI)

Universal basic income (“UBI”) proposes that all citizens receive a regular sum of money that covers the basic living costs. Supporter of the UBI, Elon Musk, argues that it will become necessary in the age of automation.

PROBLEMS WITH A ROBOT TAX

Robots can do repetitive jobs faster and quicker, leading to less waste, cheaper products and greater profits. A robot tax could be seen as actively discouraging something through taxes when it is a benefit to society.

Robot Tax could also destroy Innovation. If companies are less willing to invest in new tech because they fear extortionate robot tax, those in the tech sector will be less willing or able to develop it.

So what is your comments on robot tax?